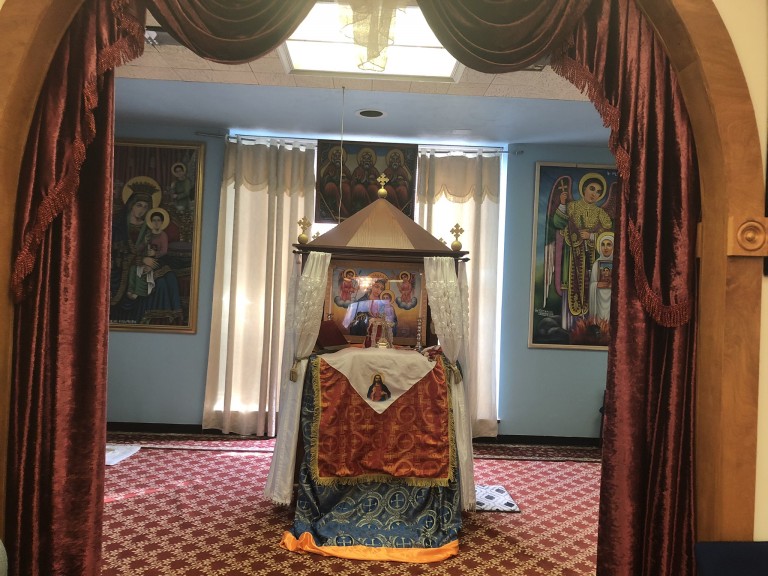 “Thou shalt make an altar of shittim wood, five cubits long and five cubits wide; the altar shall be foursquare: and the height thereof shall be three cubits. Exodus 27.1

Beyond the fact that the Ethiopian Orthodox Tewahedo Church is an ancient, historical and national church, it is also considered as the second church on earth next to the church of Jerusalem. The reference to this can be found in the Acts of the Apostles wherein St. Luke records that just after Our lord and Savior Jesus Christ ascended to heaven, having completed his earthly ministry and healing work, the Holy Spirit descended on the apostles on the day of Pentecost and they began evangelizing those who dwelt in the vicinity of Jerusalem. At which time the Holy Spirit said to Philip, “arise and go toward the south unto the way that goes down from  Jerusalem unto Gaza, which is desert.” There he found the Ethiopian Eunuch who was reading a passage from Isaiah which spoke about the saving work of Our Lord Jesus Christ. The Eunuch being moved to accept baptism asked Philip what would prevent him from being baptized. and finally through the help of the Holy Spirit, he was baptized and became the first one to introduce Christianity to the people of Ethiopia.

Since that time the Ethiopian Orthodox Tewahedo Church came into existence and one of the Holy Books that the  Church uses for doctrinal teaching, prayer, and the worship of God is the book of the holy liturgy called Kidasse. The Kidasse  is made up of 14 Liturgical Prayers that are used for the service of the consecration of the body and blood of Christ, however, the full liturgical service can be divided into three subsections.

1. The Preparatory Service – is known as Serate Kidasse and it consists of all the prayers that are used to prepare for the consecration of the bread and wine. This includes prayers over all of the vessels that will be used during the service, as well as, prayers over the actual bread and wine. There are also prayers of absolution said over the people so that they are prepared to receive the body and blood of Christ.

2. The Didactic Service – is the part of the service that prepares the people for being worthy to stand before God. During the Preparatory Service there are three readings from the letters of the apostles. The first deacon reads from the letters of Paul. The second deacon reads from the letters of Peter, James, John, or Jude. The second priest reads the third message from the Acts of the Apostles. This is followed by the celebrant priest reading from one of the 4 Gospels. After this the Didactic Service is brought to a close with a message or sermon to the people exhorting them to accept the teachings of Christ. Finally, the deacon comes out and commands the unbaptized catechumen to go out from the church and study, while the baptized recite the prayer of consecration with the clergy and receive of the Holy Communion.

3. The Anaphora – the word anaphora is a Greek word that means repetition, or the act of carrying back. There are 14 Anaphoras that are used to consecrate the bread and wine and turn it into the Body and Blood of Christ.

Anaphora of the Apostles

Anaphora of the Lord

Anaphora of St. John the Son of Thunder

Anaphora of the 318 Orthodox Fathers

Anaphora of St. Gregory of Nyssa

Anaphora of St. Cyril of Alexandria

Anaphora of St. Jacob of Serug

Anaphora of St. Gregory of Nazianzus